Using GLSL shaders in Jitter just got even easier.

Available in the Max Package Manager on Mac and Windows! 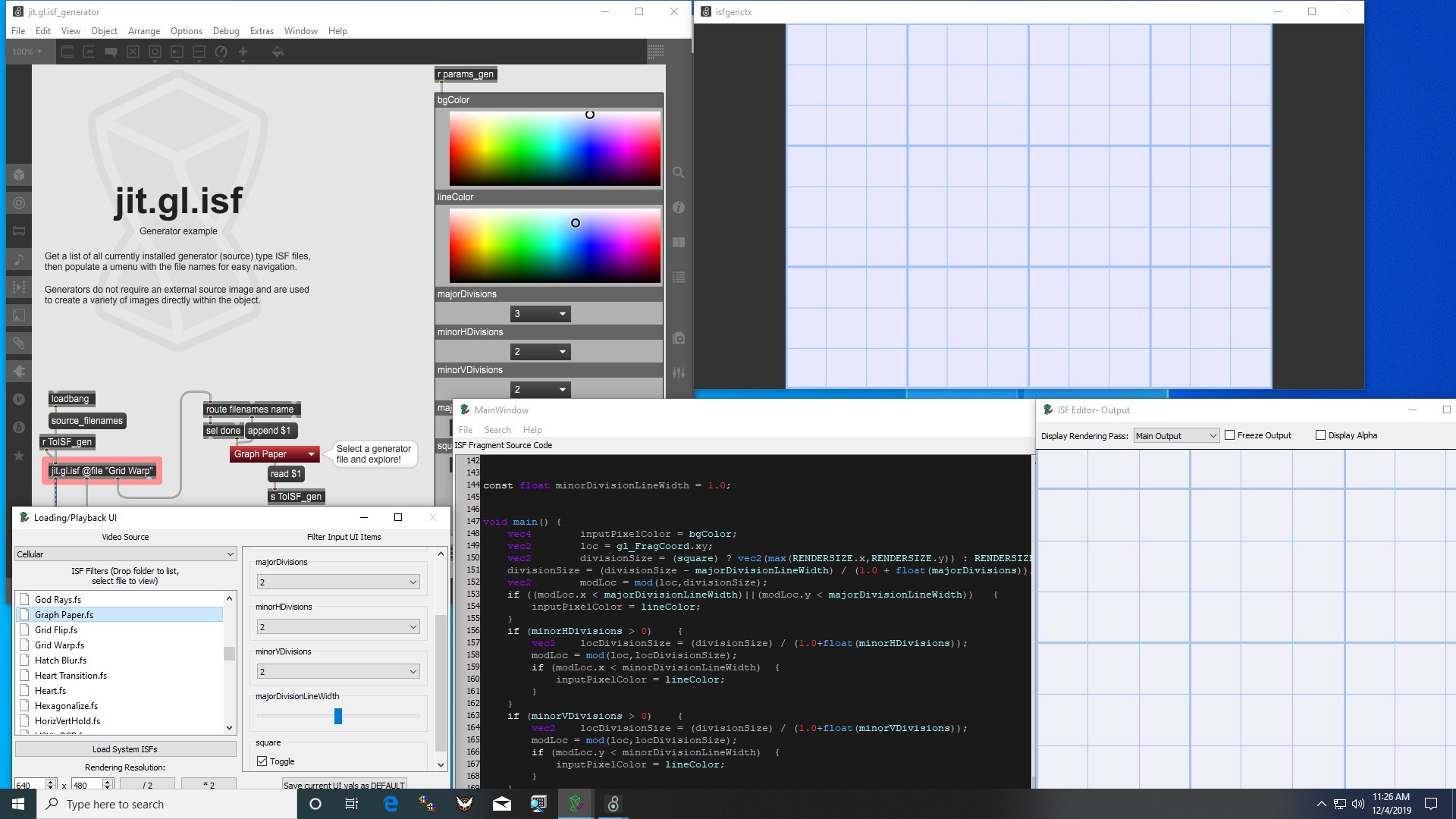 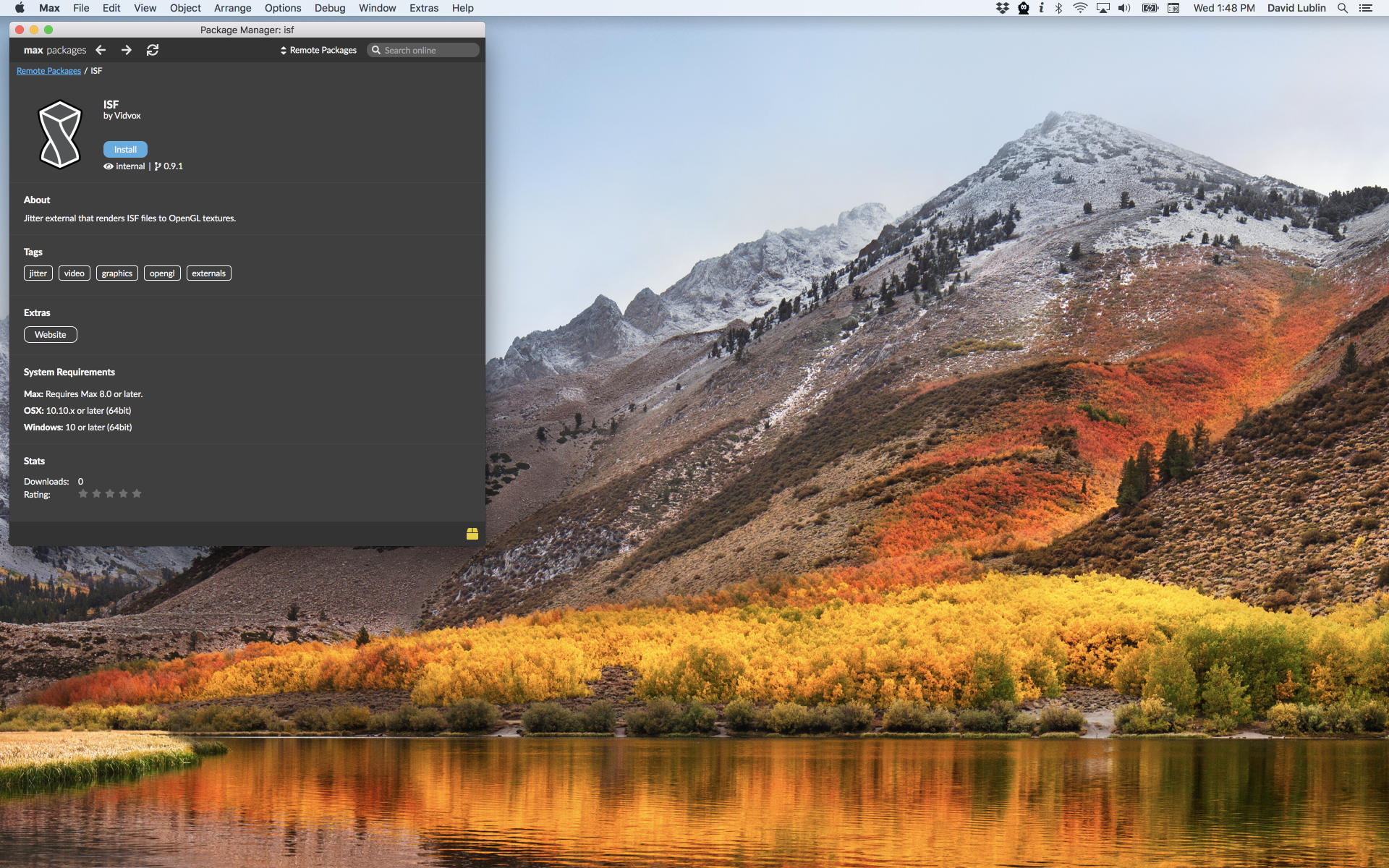 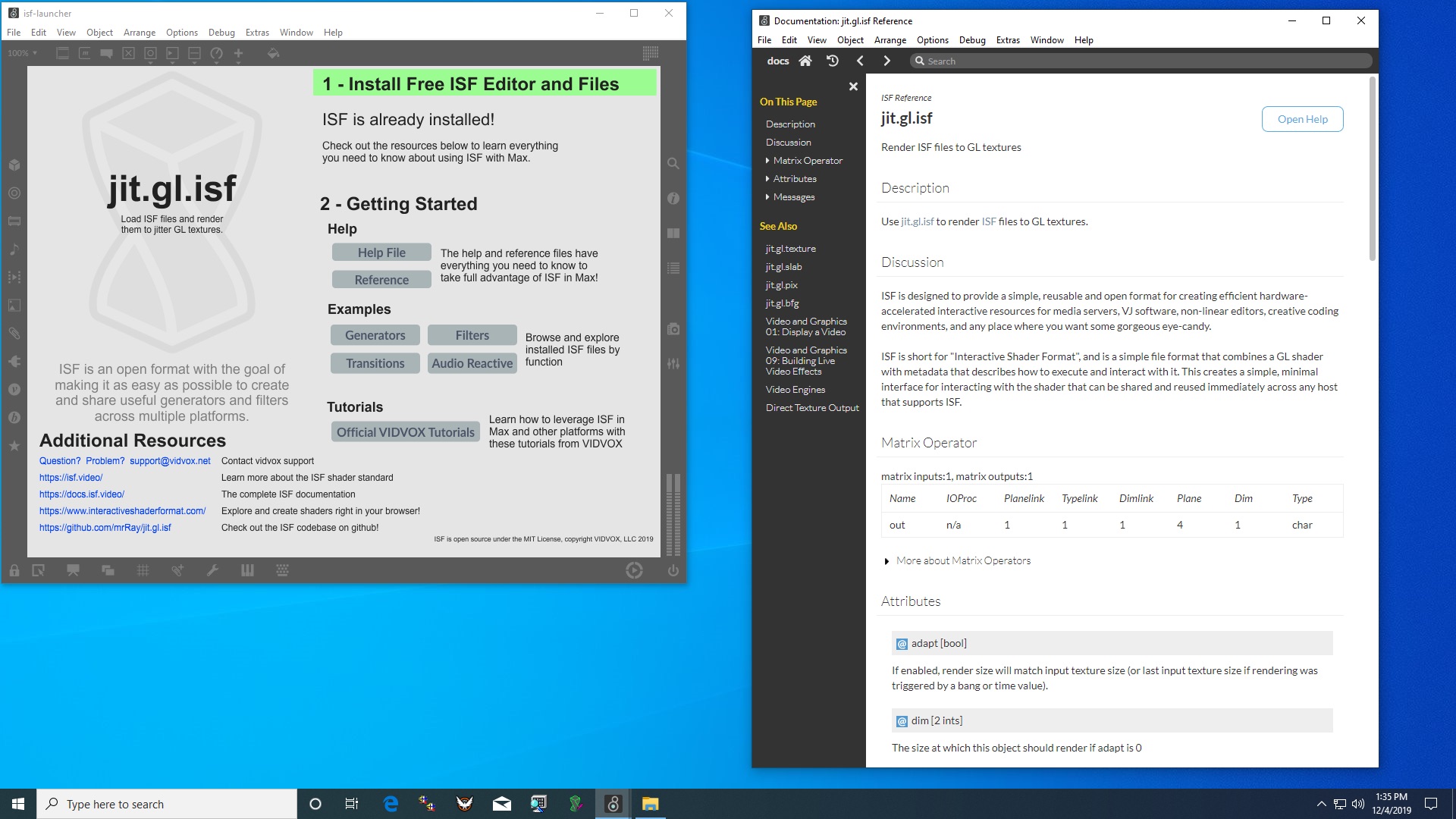 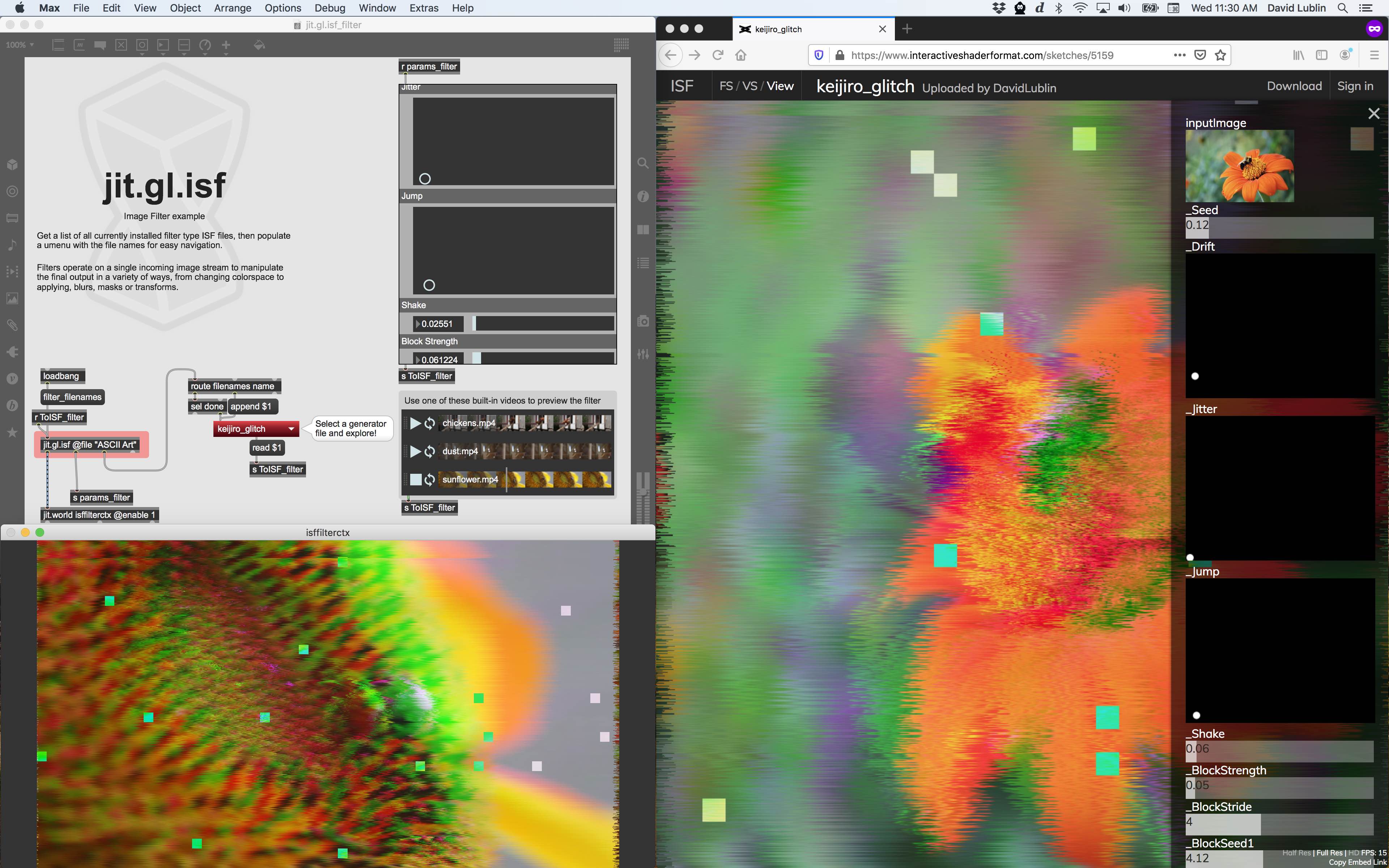 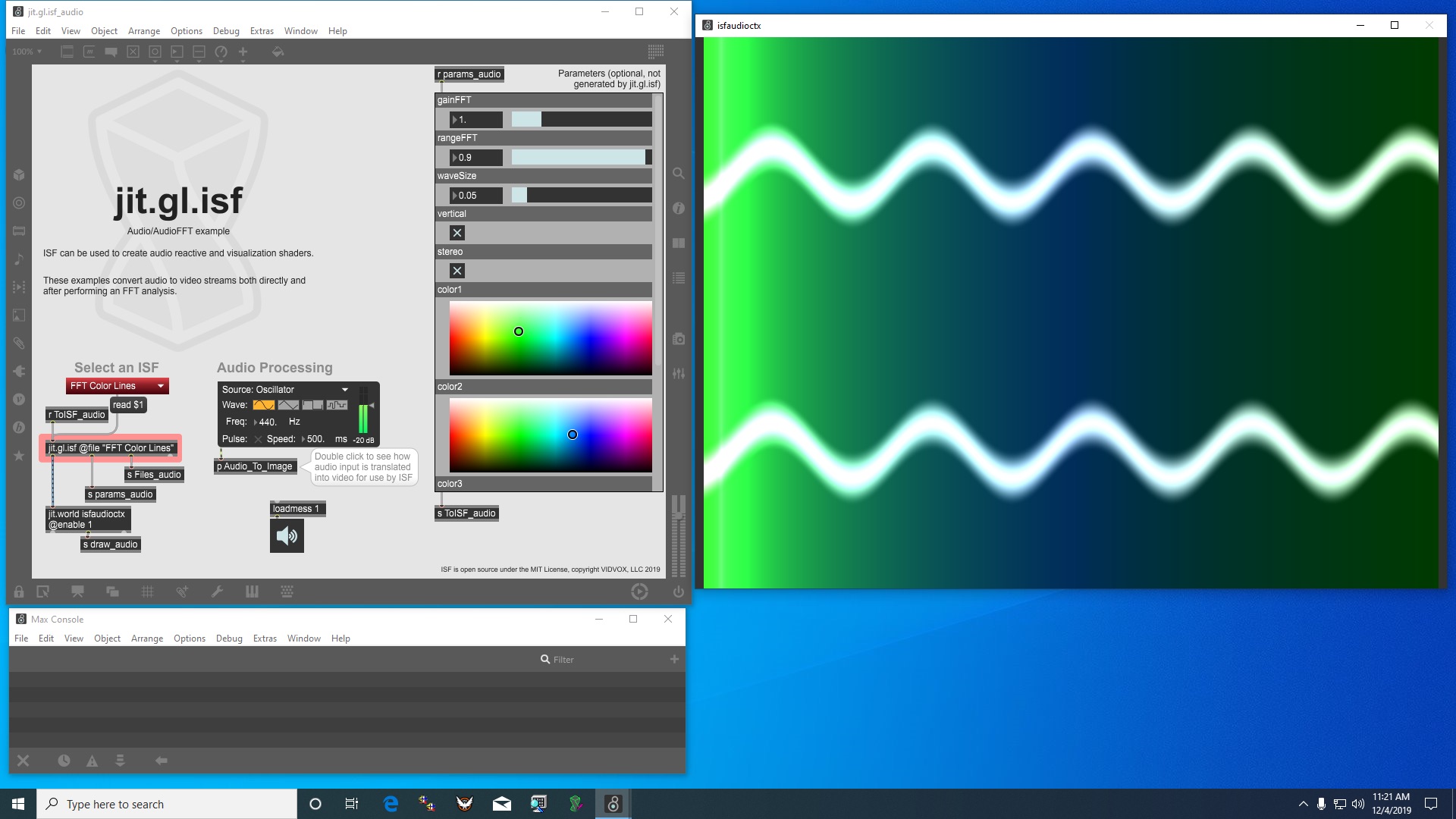 ISF for Jitter can be used out of the box with over 300 generators, effects, and transitions. Install the free ISF Editor to get the standard collection of shaders that include a variety of unique looks you won't find anywhere else and basics that you can use as starting points for your own code creations.
Use the Max package manager to download the jit.gl.isf object and access the launcher patch. Available on Mac and Windows.
The jit.gl.isf object comes with extensive documentation including a complete reference page, help patch and several examples demonstrating how to use ISF alongside other Max objects. Load the launcher patch to get started.
Visit the ISF sharing website to find new generators and effects that can be used directly in with jit.gl.isf without any additional conversion. GLSL shaders written in other formats are often easily translatable to the ISF specification. See the ISF Documentation for useful tips and examples.
The ISF specification helps standardize techniques for creating advanced compositions like audio visualizers. See the include example patches and ISF Documentation for more information.

See the included documentation and help patches for more information on using jit.gl.isf in Max.

Introduction to writing ISF shaders – How to create your own shaders in the ISF spec.

Converting GLSL Shaders to the ISF Specification – Tips and examples for adapting existing GLSL code to use with jit.gl.isf and other supported software.

Using ISF Shaders in Max – An introduction to using the jit.gl.isf object in Max to use ISF generators, filters and transitions in Max with a walkthrough of the included example shaders.

How do I install jit.gl.isf?

The jit.gl.isf can be installed from within Max using the Package Manager.

If you prefer to manually install the package, the object can be found in the jit.gl.isf repository on GitHub.

Why use ISF instead of the built in Jitter GLSL capabilities?

One of the key focuses of ISF is to create a standard for GLSL shaders that can be easily used across different applications and platforms. This means you can download shaders from https://www.interactiveshaderformat.com/ and use them directly in Max, Motion, VDMX, and a variety of other apps without any conversion. ISF also makes it easy to create self contained shaders that include advanced features like persistent image buffers and multiple passes, making it possible to create advanced shader creations completely in code.

Where can I find the standard set of VIDVOX shaders?

If you would like to use these shaders as learning materials or starting points for your own creations, they are bundled with the ISF Editor and can also be found in the ISF Files repository on GitHub.

How do I get started with creating my own ISF shaders?

You can create your own shaders (or remixing existing ones) using any standard text editor, or our free ISF Editor app. See the ISF Documentation Quickstart for more information with getting started with your own ISF shaders.

How do I convert shaders from GLSLSandbox, Shadertoy and other similar GLSL specifications?

In some cases our free ISF Editor app can automatically translate GLSL code from other similar formats with little or no additional adaptation needed, as demonstrated in the Converting Shaders From Other Formats tutorial.

For more information on converting code from other specifications see the Adapting Existing GLSL Code to the ISF Specification and Tips for Converting Non-ISF GLSL shaders to ISF sections of the ISF documentation.

Alpha channels are supported and are widely used in the set of standard shaders. If you are having problems with a custom shader, make sure the alpha channel is properly handled in any custom GLSL when setting gl_FragColor.

What can I do if I have a problem with jit.gl.isf?

Please contact our support email for any issues with ISF for Jitter.

Where can I find the complete ISF specification and documentation for writing my own shaders?

Visit docs.isf.video for the ISF Reference Pages, an introduction to writing ISF shaders, and more.

What versions of OpenGL does ISF for Jitter work with?

jit.gl.isf can seamlessly work with GLSL shaders written in OpenGL 2, OpenGL 3, and OpenGL 4, regardless of which version of OpenGL you are using in Max.

What other software and toolkits support the ISF Specification?

ISF for Jitter is part of an ecosystem of video tools that use the ISF specification as a standard for working with GLSL based generators, transitions and effects.

A list of apps and open source frameworks with support for ISF shaders can be found on the isf.video website.